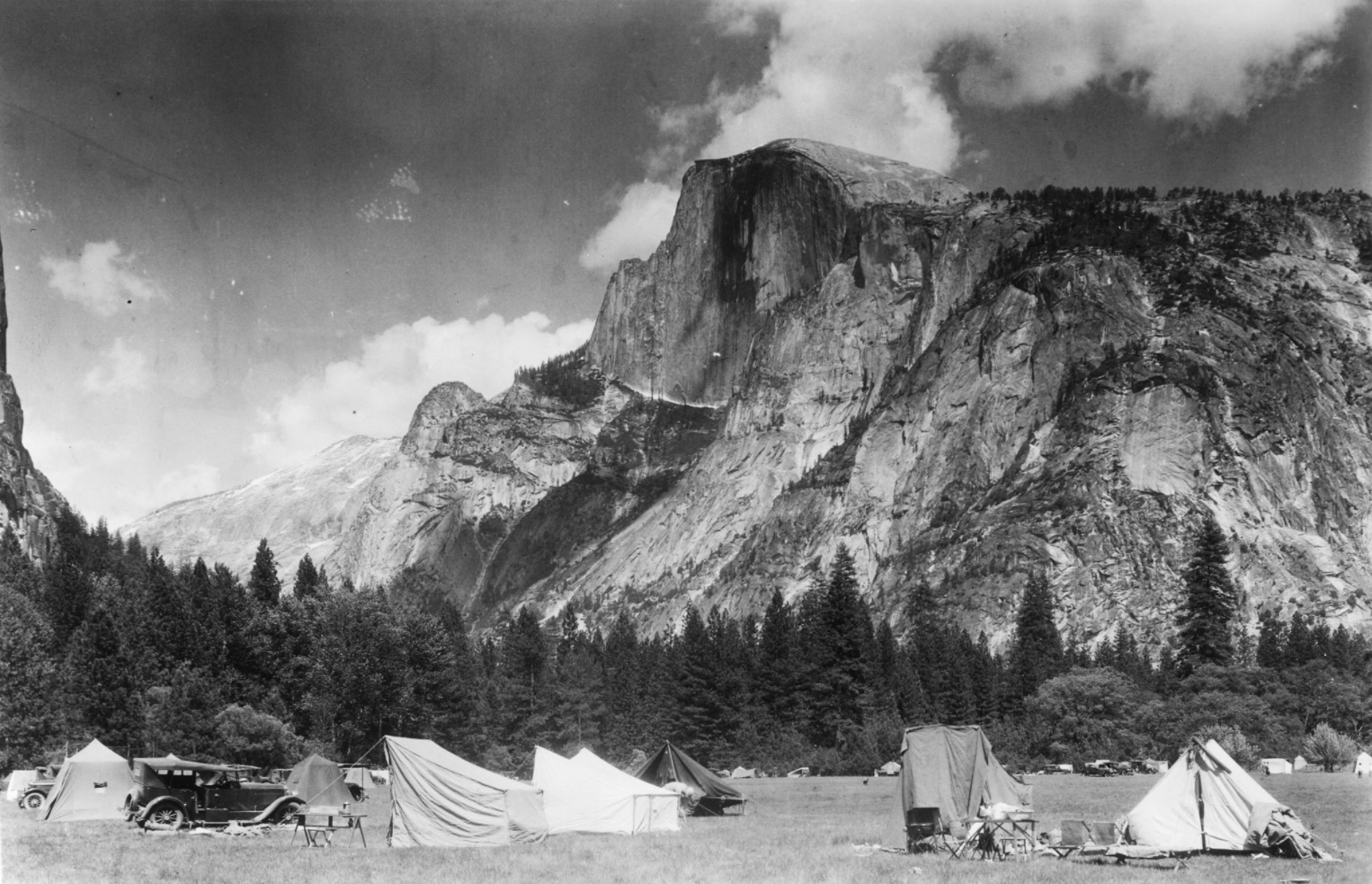 The Sierra Nevada region which was once submerged beneath the sea grew thousands of feet in thickness and compressed the lower layers into rock from sediments that slowly accumulated on the ocean floor. Part of the Pacific plate slid under the North American plate in a process called subduction. This created tremendous heat and pressure which caused the Pacific plate to melt into magma deep within the earth. Magma rose toward the surface and cooled the underground into a huge block of granite. The land that is now Yosemite National Park was made up of gentle, rolling hills and streams, including the slow-paced Merced River. Hardwood forests flourished. With time the Sierra Nevada rose.

The Sierran block gave lift, tilting westward; it increased the Merced River?s flow so it carved the valley into a canyon. Redwood forests flourished. The Merced River carved its canyon as much as 3,000 feet deep. The land was cut slowly by its tributaries. As the Ice Age drew near, the forests began to thin. Until approximately 250,000 years ago, glaciers filled the Yosemite Valley, widening, deepening and carving it into a "U" shape, as oppose to the V-shaped it previously had. It formed hanging valleys from which waterfalls now cascade.

Many years later the Yosemite Glacier entered the valley but did little to alter the landscape. Older glaciers had already excavated 2,000 feet into the bedrock. Temperatures eventually warmed and the last valley glacier melted. Its terminal moraine (rock debris) dammed the valley 14,000 to 15,000 years ago, creating Lake Yosemite. Sediment eventually filled the lake, which became the flat valley floor we see today. This process of sedimentation continues today at Mirror Lake. Eventually, sediment will completely fill in the lake, creating a meadow. Water and gravity continue to shape Yosemite's landscape. The most dramatic events in the recoded history of the park have been the Happy Isles rock slide of July 1996 and the flood of January 1997.

Native Americans were the first to inhabit the region probably 7,000 to 10,000 years ago. The region was populated by various tribes throughout the years; the most recent was the Miwok tribe. They called Yosemite Valley Ahwahnee which is believed to mean, ?Place of the gaping mouth.? They referred to themselves as the Ahwahneechee. The Ahwahneechee lived off the land, harvesting acorns, hunting and fishing. Their tranquil lifestyle ended with the discovery of gold in the foothills of California. Some of the members of the tribe, angered by the encroachment of the western miners, attacked a trading post in the Merced River Canyon. The miners in retaliation organized state-sanctioned Mariposa Battalion, which entered Yosemite Valley on 27 March 1851 in pursuit of the Yosemite Indians. Tenaya, the Yosemite chief, had been leading his tribe in raids on white settlers in the foothills of the Sierra Nevada. The Battalion captured Tenaya and his tribe. They marched them to reservations in the foothills and eventually let the Indians return to the valley, which was named after them. The first party of tourists arrived by 1855.

A group of influential Californians encouraged Abraham Lincoln to sign the Yosemite Grant nine years later. This set aside Yosemite Valley and the Mariposa Grove of Giant Sequoias as a state supervised public reserve. In 1890, Robert Underwood Johnson, editor of Century Magazine, and John Muir, were concerned that the high country and watershed for Yosemite Valley were being destroyed by grazing and timber interests.

The two launched a successful campaign to persuade Congress to set aside the high country as a national park. Wawona was once an Indian encampment and, later, was the site of a wayside hotel built in 1856 by Galen Clark. Known as Clark's Station. It served as a stop for visitors in the transit between Yosemite Valley and Mariposa. In 1864, when Yosemite Valley and the Mariposa Groves were set aside for protection. Clark became the first guardian of the area.

In 1875, the year the original Wawona road opened, the Washburn brothers purchased the area and build the Wawona Hotel that is still in operation today. Wawona focuses on Yosemite's human history. It is the setting of the Pioneer Yosemite History Center, a collection of relocated historic buildings and horse-drawn coaches. In 1906, Yosemite Valley and the Mariposa Grove were returned to federal jurisdiction. In 1932, the Wawona Basin, including the Wawona Hotel and golf course were purchased and included in the National Park. Open since 1927, The Ahwahnee is one of America's most distinctive hotels, unparalleled in magnificence and charm. The hotel is a great American castle, massive and warm with huge cathedral ceilings, enormous stone hearths and richly colored Native American and Oriental rugs. The hotel was designated a National Historic Landmark on 02 Jun 1987.